852 replies to this topic

Not sure if such topic has been made already, ...probably not. Every day I hear meat-eaters say stuff that they have no idea how incorrect it is and I'm honestly sick of it. So here it goes:

"Humans are born to eat everything. They are designed to eat meat." - Mother. Actually, all humans are born vegan. Cavemen have learnt that animal meat can be consumed and used for food, and ever since then, meat-eaters count animal meat as food. But just because something can be eaten, doesn't mean it should.

"If you don't eat meat or drink milk, your bones will start to break." - Grandmother. I would like to see some evidence that dairy milk is good for the bones. As a matter of fact, many studies have shown that animal protein can cause bone loss in humans.

"Look at your nails, they're purple! You know why that is? Because you don't take iron. And meat is the only way for you to get iron." - Grandmother. Well, it's true that my nails are purple because of the lack of iron, but it's wrong to say that only meat contains iron. Beans, lentils, peas and soybeans are also foods that are rich in iron. This is real, this is me:

My family pester me about being vegetarian too.

but eating veggies is killing life too you know

i don't think "killing" veggies reduces their quality of life, but even if it did, we do have to eat something, and eating veggies is the most ecological. i mean, eating meat kills both animals and veggies - how do you think animals are fed?

*points to canines* "If we're not supposed to eat meat, then what are THESE for?"
Yeah, because those look exactly like a carnivore's teeth.

"So do you eat fish?" "What about eggs?" "YOU DON'T EAT CHEESE I COULDN'T LIVE WITHOUT CHEESE!"

Actually, I really think you could.

"I tried to be vegan once but I just felt soooo unhealthy that I had to stop." *Bites into fatty cheeseburger*

Right, probably because you lived off french fries and oreos. 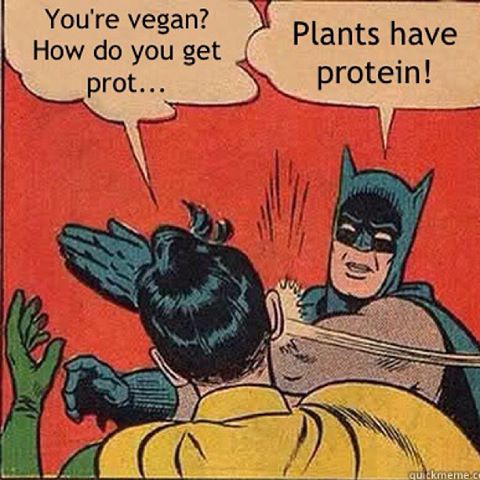 The protein question is the most annoying. The rest i take more as admiration of self control that people lack- like "YOU DON"T EAT CHEESSEEEEE????"

and here's one for our thursday loves!

Where do you get your protein? Even doctors! Stuuuuupppiiiiiiiidddddddd

Let your weight define you and your mood. Stay strong.

"What is THAT?" *disgusted face*
"That looks disgusting!" (Yes, a co worker actually said this about my lunch.)
"Dont you think this look so much more tastyyyy?" *Waves burger in my face*

And the usual wheredougeturprotein bullshit.

Diagnosed with Anorexia nervosa 2004. Recovered. Fat. Normal.
I am going to do it properly - everything is different the second around

"I could NOT live without bacon"

"God put animals on this earth for us to eat"

"But humans are at the top of the food chain"

I'm not a vegetarian myself, but it really annoys me how heated some people get over people who choose to be vegetarian. First of all, it's like they can't leave them alone about it. They have to like rub it in their face that they think their meat eating ways are far more superior and somehow wonderfully decadent in their eyes. Secondly, some meat eaters have this idea that they have a right to be mad about vegetarians. To me I think there are far worse people in the world than people who choose to not eat animals because of moral, or dietary reasons for fucks sake.

I've heard other meat eaters mention human canines and other shit for proof, but really, who gives a fuck? It's not like you're going to see a video of an animal be brutally slaughtered, and just be like "Oh, it's okay. I have canines."? I don't know, it's baffling to me.

I've always respected the vegetarians I know whether they've been one for years or weeks. I don't like to give them shit about it.

On the flip side though, my ex was a vegetarian and it'd really annoy me when he would go into great detail about how chickens or cows are slaughterd WHILE I'm eating. If I respect your decision, then respect mine. I really aspire to be a vegetarian someday, but it's been difficult for me. It's really easy for others. I don't know; just rant over.

omg all of these. alllll

"Where do you get your protein/iron?" - Animals aren't the only thing with fucking iron or protein, you imbecile.

"It's natural to eat meat, why do you think God put animals on this planet for?" - SERIOUSLY... STFU

*someone eating something covered with meat* "Don't you just wish you could eat this" - Fuck off.

"You're not a true vegan because you eat your boyfriend's meat!" - *facepalm*

but eating veggies is killing life too you know

i don't think "killing" veggies reduces their quality of life, but even if it did, we do have to eat something, and eating veggies is the most ecological. i mean, eating meat kills both animals and veggies - how do you think animals are fed?


I hear this horseshit all the time. I seriously may flip out the next time someone tries to justify animal slaughter to me

The infamous "But how do you get your protein?" and tangents about bacon.

v; to get too skinny.

As i meant eater i found these very funny

There are very educated vegans who eat very well. I just get conceded when someone "goes vegan" and has no idea what they are doing

but cavemen used to eat meat you know.

right. and cavemen ate cheeseburgers and fries all the time. of course. and they also used electricity, so that's all good. i see the force of your argument.

Also tagged with one or more of these keywords: meat-eaters