Blew out a knee while sleeping. Doctor said it must have gotten caught in the sheets while I rolled over and since I was on seroquel, I didn't even wake up.

I had a big bubble of fluid over it and it was a month and a half before I could squat down without screaming and falling over sideways.

And at the time, I was taking care of 8 disabled men who couldn't tie their own shoes so I had to squat quite often. My coworkers eventually got rather annoyed with the screaming.

Spilled tea on my chest and left a tear-shaped burn scar almost directly over my heart. Lamest. Scar. Ever. 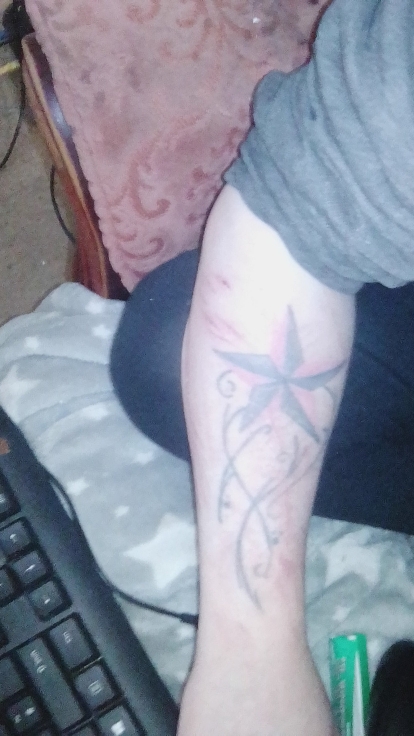 Sent from hell it's self using Tapatalk

Hitting my knuckles against the bathroom door handle. I'd forget it happened and kept doing it repeatedly

Blew out a knee while sleeping. Doctor said it must have gotten caught in the sheets while I rolled over and since I was on seroquel, I didn't even wake up.

I had a big bubble of fluid over it and it was a month and a half before I could squat down without screaming and falling over sideways.

And at the time, I was taking care of 8 disabled men who couldn't tie their own shoes so I had to squat quite often. My coworkers eventually got rather annoyed with the screaming. 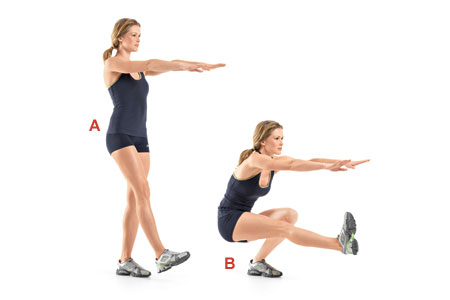 I'd have tried to learn to do this as fast as I freaking could lol! That sounds terrible!!

Omg my entire life is stupid injuries. Some highlights:

Chopped my finger with an ax while teaching a kids survival skills/nature connection course. On parent visit day none the less. After I called my co-instructor to take over my group I drove myself to urgent care and got stitches. Best part is none of the kids or their parents found out I had hurt myself.

Broke a different finger when a kid dropped a boulder on it.

Dislocated my shoulder trying to do a workout move I saw on youtube. Like sit ups but with a 35# barbell in one hand held overhead.

Embedded a crowbar in my forehead while perched on the roof of a chicken coop, taking out nails while trying to dismantle said chicken coop.

Gave myself a concussion being dramatic and falling backwards in pretend despair about something. I was too close to the wall and smashed my head into it on the way down.

Dislocated my shoulder a different time when a tree I was climbing fell down with me in it.

Got a 10" by 6" third degree burn on my thigh when I spilled a kettle full of boiling water on myself trying to make coffee.

Put a slug on my face and it ate a patch of my cheek. Like, it was bleeding and torn up when I pulled the slug off.

Fell down while I was running and skinned my face.

Adult: Was sound asleep had a vivid dream about kicking a soccer ball and ended up kicking the foot board on the bed bruising my foot and kneeing my hubby in his back leaving a big bruise the next day! So a two for one deal there. Yeet!

I often smash my forehead on the pointed edge of the stove hood if I'm moving too fast.

have managed to drop my phone and smash my toes with it. This is one tough phone, dropped it a lot and it keeps in working without a hitch! Wooo

Dropped my phone while sitting on the couch leaned over too far when sitting cross-legged, spun off the couch and cracked my head on the coffee table. Had a nice goose egg for a couple of weeks there.

Attack of the stupids: Picked up a stray cat that soon showed me not to fk with them ever again. I was pissed at the cat so had in my dumb head to toss it gently in the woods? Don't ask was like 90 degrees that day and the kids around here wouldn't shut up about the damn cat, he wouldn't leave them alone. My brain was goonk mush that day. So much blood.

I could have let go way sooner but the cat and I were both growling at each other. xD I get so weird at times. Like fk you cat, go ahead bite me. Growwwl. Anyway I ended up putting the weird cat down and needing several stitches. My temper is awful at times so a show down with a cat instead of yelling at the kids? Ok makes perfect sense. I think I wanted pain that day. O.o

Don't take me wrong, I love most cats and most of them love me back and dislike everyone else, but that cat? Nope. Just bad timing he's pissed, I'm pissed a bad mix.

A year later only have one scar, so that's good.

When I was 7 I sstood on a small bolder in grandma's yard fell and cut my shin from ankle to the knee. I was bleeding like crazy and nobody took me to the ER. :/ That hurt.

As a teen fell-slid down grandma's stairs, thump, thump and Wham-o landed on my tail bone didn't cry for several seconds until the pain kicked in, then started to shake as it hurt a lot. I think I broke it as I still can't sit on it many years later. ER? HA. My grandma yelled at me for crying. This bring back less than happy memories.

Young adult: Sliced open my left thumb knuckle the one on the palm, it was so deep I saw bone. So much blood!

Went up the stairs a few years ago to go into the hipnadome ( a hocky rink place) Didn't see an extra step that was stupidly panted black and only anvinch out from the bottom of the door entrance. Wham! Tripped, fell hard on my left knee and caught myself with left hand but most of the force of the fall went into the palm and fingers so my entire hand was black, blue and swollen for a couple of weeks.

Was pregnant ten years ago and had walking pneumonia and didn't even know until a couple of weeks later when I felt really tired and started to cough. It got way worse but was in the hospital by then so it turned out allright.

All other injuries are frkm smacking in to things and such or darn near cutting my fingers off when cooking.

Last summer was at top speed on my bike didn't see the loose sand on the corner when trying to go up hill, fell off the bike and smashed my left knee so hard it was bloody and had a huge angry bruse for a couple of months after. That made me dizzy and I shook in pain for several minutes before hopping back on the bike and going back home. And now have a strange bone lump under the knee.

So very painful! I'm going to buy some knee pads this up coming summer and get the lump looked at.

I think my pain tolerance is a little too high and don't realize when I need to go to the er...

That's it no more hummus. (The next day has more, lolz.)

I fell off the elliptical machine 😂

I self harm severely as in pretty much my cuts need stitches every time. The other day at work, I (accidentally) cut myself with a bread knife and everyone’s like oooooh are you ok, ooooh that looks SOOOO painful and I’m thinking, if only you saw what my arm looked like. Not really funny but funny to my dark sided humour atm


Sent from my iPad using Tapatalk

Deep fried my right index finger. I haven't been able to draw sonce then :'(

i was staring at my friend while walking in the hall in school and walked straight into a pillar lmao. i was walking a pretty fast pace too

Tried to close the sports lid on a bottle of water with my tongue and got it trapped. Panicked and let go of bottle so it was hanging there with it's full weight on my tongue. There was blood everywhere. If that wasn't bad enough I tried to show my mum how it happened...and did it again!
I can't believe I've survived this long lol.

Sent from my SM-G770F using Tapatalk

If your dreams don't scare you, they're not big enough!

I broke all the ligaments in my ankle, my ankle rolled down a step and the outside of my ankle landed flat on the ground.
Sprained my ankle two more times (same way)
I was cutting hair and I dropped the razor and grabbed the blade with my hand
Two years ago I Sliced a massive chunk out of my finger cause I grabbed a razor wrong
Gave myself a black eye cause I dropped my phone on my face three times in twenty minutes
I knelt on a plug and put a hole just below my knee cap.
There’s many,many,many more.

Skateboarding without protection, fell straight on my skull directly onto the concrete. Good thing my neighbours called the ambulance
Please wear a helmet folks don't risk becoming a vegetable cause of brain damage xx

I think my ultimate favorite was last hospitalization being so zoned pacing the halls and so tired ...yeah I look up to see my psychiatrist coming as I flat out walk into the glass part of the wall/door with my face smacking audibly....Not sure I get to live that down ever.

Ironing jeans that I had actually on me. Burnt right thigh (but fortunately it wasn't that bad and left no scar).

Okay did something similar in 7th grade was ironing khakis for communication arts show and iron print burned my left leg...like 2nd and 3rd degree burn whole thing a blister shaped like the damn iron. Honestly if I went back to stupid shit my whole life I could prove write a book

I’m visually impaired from a neurological problem, things up close and right in front of me I see normally. Anything more than 4 feet from my eyeballs or not directly in front of me (and this includes the floor) either I don’t see, I perceive it as closer or farther away than it actually is, or extra fun: my brain makes some shit up. In my case it happened gradually because of brain damage from mitochondrial disease. I’ve always been super clumsy so I wasn’t really aware that something was going wrong until I broke my arm when I tripped over something I didn’t see, tried to grab a railing that didn’t exist, and fell off the sidewalk.

As a kid, I rode my bike straight into a mailbox. As far as I know I was fully sighted then, just dumb. :facepalm:

Back to Illness or Injury