Would you eat meat if... - Page 4 - Vegetarian/Vegan/Raw Food Diets - Forums and Community

Would you eat meat if...

Personally no. I haven't eaten meat in 10 yrs and it'd make me sick anyways lol. But, I won't judge people who would.

Personally I would not eat it because can't stand idea of eating flesh.

But I appreciate individuals who put the effort in raising their own livestock in a well environment and butchering the animals themselves or Hunters who hunt and end up using every part of the animal.

no. taking the innocent life of another creature is not nessecary for my survival. the only time i would ever eat meat again or kill an animal is if i was in a situation where my life was in danger (would starve to death, animal attacking me and so on).

regardless of how "nice" their life is, no animal deserves to be slaughtered for our enjoyment. I can live perfectly fine without meat. I value a sentient life over my taste buds.

No, because it's still unfair to kill them for just personal fun/taste, and it's still really bad for the environment.
This is also a fantasy scenario and miles away from what happens in the real world.

No. Killing them is wrong in any case

no? animals have the right and will to live, why would i want to eat the corpse of a dead being that literally had consciousness. murdering is also just, you know, wrong. and meat isn't healthy anyway. 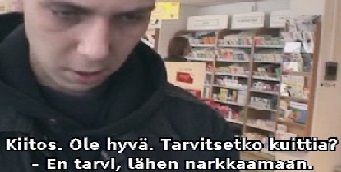 No, I don't believe it's necessary to kill animals and don't even want to eat one.

EDIT: First off, WOW. This is a ton of responses and I honestly thought I'd get like, 3 nopes and this thread would die. So thanks for that guys! I posted this thread because I do not have full control over my diet (parents are the best, amirite?) And these were all of the excuses my mother gave me to NOT be "allowed" to not eat meat. In recent months, we have still been compromising. Thank you all for the (rather resounding) input you have given.
So I am NOT trying to start an argument and I'm just wondering for you guys:
-You personally know the person raising the cattle
-Youve seen the animals and their enviroment
-You know what they eat
-They are put to sleep before transport and sleeping during
-You have seen the locker and ethics kept there
-The meat is minimally processed
-There is no waste- all of the animal is eaten/used
Would you eat it then??


I don't think I would, but I still believe that hunans are omnivores and we do need animal sources to thrive. I really don't like it, but I'm feeding meat/dairy/fish/eggs to my small children, because they are quite picky and I don't want them to develop any health issues because of my belief. I'll educate them and I'll let them decide if they want to be vegan when they are bigger.

So, answering your question, I would be happy if there was a very ethical way for getting meat (I know it would still involve killing animals). I also believe that it would the environment a lot if everyone reduced their meat consumption. There is no need for everyone ro go vegan, just eat less meat. Our ancestors didn't eat meat every single day...

No because even if I wasn't vegan for ethical/environmental reasons, I really don't like the flavour and texture and smell of meat. Even vegan meat substitutes are too close for my comfort. It just makes me nauseated.

Also at the end of the day I see meat as just an animal corpse, no matter how well it was treated and how "humanely" it was killed, it was killed after all. Just to be eaten. It is so greedy and entitled to kill a life for food when there is so much more other food that could sustain us very well. This is the 21st century and I think we're above that.

♡I'm Legendary, all Legs, no Dairy, and this is My Diary♡

I'm 23 and haven't eaten it since I was 11 and for all of those reasons as well as probably any reason I wouldn't eat it again. It just disgusts me, I don't think I'm meant to consume a dead creature and have it absorbed into my body, even typing this makes me cringe actually.

I do believe everybody can make their own choice, though. In my perfect world the animal's choice to live would be what matters, and we would be considered equal and be equally deserving of life, but at the same time I don't think that you can deny that we have evolved beyond them. To me it doesn't mean that we have the right to end their life for something that we don't even need but not everybody has the same beliefs as me.

Me thinking this way is honestly also a coping mechanism because the fact that you can go get a piece of a cow from the dollar menu used to make me suicidal, so...

Sent from my SM-G930W8 using Tapatalk

No the thought of eating it makes me gag

-You personally know the person raising the cattle

No. The person keeping the animals can be the cutest, sweetest, nicest and most animal-loving person in the world, I still wouldn't give them a single cent for meat and support them. I'd give them an evil and disgusted look. I don't understand how people can say that they love animals and at the same time make a living killing them and breeding them and ? It just doesn't add up?

-Youve seen the animals and their enviroment

No. Animals don't have a deathwish like some of us do, living a nice life doesn't justify being killed after a few months (no one wants to eat an old animal).
-You know what they eat

No. I don't believe in the propaganda that meat is supposedly healthy because it is literally the body and hormones and flesh of another creature that once was living just like me and you. They could even eat humans and shit out diamonds and I wouldn't want to eat them.
-They are put to sleep before transport and sleeping during

No. I wouldn't want to be injected a narcotic with the thought "Oh! I'll wake u later again!" and never wake up again. A pathetic and paralysed death. This is no honor. This shouldn't happen to anyone who doesn't wish for it.
-You have seen the locker and ethics kept there

No. They die and we don't have the right to create life and kill it off as we please, we are no gods.
-The meat is minimally processed

No. I don't want to eat rotting soul-prisons. Meat is not healthy in my opinion and the texture is disgusting and the thought of eating a piece of flesh that once was thinking and breathing and living and feeling is even more repulsive.

-There is no waste- all of the animal is eaten/used

No. The grains and land that are used to create this meat could have been used to feed people who really need the ressources and would have been invested there more economically.
Would you eat it then??

how long can u resist the choco bar?

Spoiler
I feel disgusting, like a gigantic blob of shining, boiling fat.

All I want to do today is to kill this self of mine. I want to cut open my skin and cut out all the fat underneath it. Then I want to boil my bones clean and pat them dry and put them back in. I want to puke out all my intestines, my stomach, guts, I want them all out in front of me in a trash can. Then I will reach down my throat and stroke my beating heart, grab it, and take it out to lock it in a little wooden box. In its place I will put a cold, sharp stone.  This way, I will still feel that it’s there because of the sharp edges of the stone, who will cut me open from the inside. When I am all clean, all flesh and bone and ice and stone, then I will go to bed and sleep until the next morning, at precisely 7:23 I will wake up, with black, glowing eyes and full of energy and nightmares. I will make myself look human again, feel human, sound human and only the bugs in my room and the crows out  front of my window will know what had happened.

No, I DID know several local cattle farmers when I went vegan. It changes nothing.
I don't know how old you are but
I went vegan at 14, and my mom has always been okay with it. However I made a PowerPoint presentation for my father stating why I wanted to, where I'd get pROtIeN and lastly, scientific proof that he was wrong.

Nope it makes me feel sick and also I don't see meat as food anymore. It'd be like eating a couch cushion, just doesn't make sense to me

nope
right now i feel like i’m vegetarian “just because”. i’ve been eating like this for about 6 years now so i don’t see any reason to eating meat even though i don’t really care for the animals/ environment/ my health anymore

You couldn’t pay me to eat meat at this point. I’ve been vegan for almost four years now, and made the switch for health reasons (IBS-C). Those years were hell for me and I would never go back. The moral aspect helps reinforce it, like once you understand how meat processing and factory farming works, you can’t erase those images from your mind.

I find it hard to feel alive

While my heart beats in borrowed time

No to all. I'm against animals being treated like products/exploited. They are living beings and deserve our respect and compassion. I don't believe in "humane" killing, unless we're talking about euthanasia due to a chronic, debilitating disease.

Oops unpopular opinion time but possibly, if there was a situation in which I didn't have access to as many foods as I do now. Like if I lived in the middle of nowhere, Alaska and we had to hunt to survive, or if there was for some reason no other source of protein but farmed animals (in the situation you described). I'm primarily vegetarian due to ethical/environmental reasons, but if I had to, and the meat industry wasn't so god awful, I'd probably eat meat.

If it was in my current situation where I have many other options, no, mostly because I don't really care for meat anymore. I'd much prefer people to eat ethically-treated meat from small-scale farms where the animals are allowed space to exist and fed actual food to the current meat industry.

Sorry, but humans are omnivores. We were made to consume meat. Not nearly as much as we do currently, but it's a natural part of a human's diet and it's not nearly as evil as half the other shit we do so....