189 replies to this topic

This is such a fun little topic to read <3 You're doing so well and our body shape is veryyyy similar so this is super motivating!! Keep going strong baby g x

Just another boring day. My high weight today is due to food weight. My weight this evening isn't too high so I think I'll be at 119 tomorrow.

I finally found net carbs on my Cronometer app. I only knew how to find them in my computer, but since I've had no Wifi since the tornado, I've just been going with total carbs. Turns out my biggest sources of net carbs are broccoli and green beans.

My old job is opening up. I hope I can go back to work soon. The managers don't even know when all the workers can be back. The unemployment I've been receiving is far from decent. 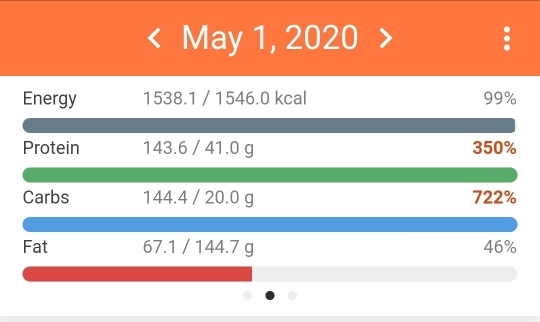 If I keep a 600 calorie deficit every day, I'll lose 18 lbs in exactly 15 weeks or 3.5 months, which is August 15. It feels like forever, but that's a deficit that'll keep me from feeling bingey, shitty, or hangry. I mean, I'll still be hungry, but feeling decent and less likely to lose muscle.

I've been keeping track of all my stats (weight, macros, deficits, steps...) in an excel document and here's a chart of my weight every morning since I started this accountability. Sorry the quality isn't good. 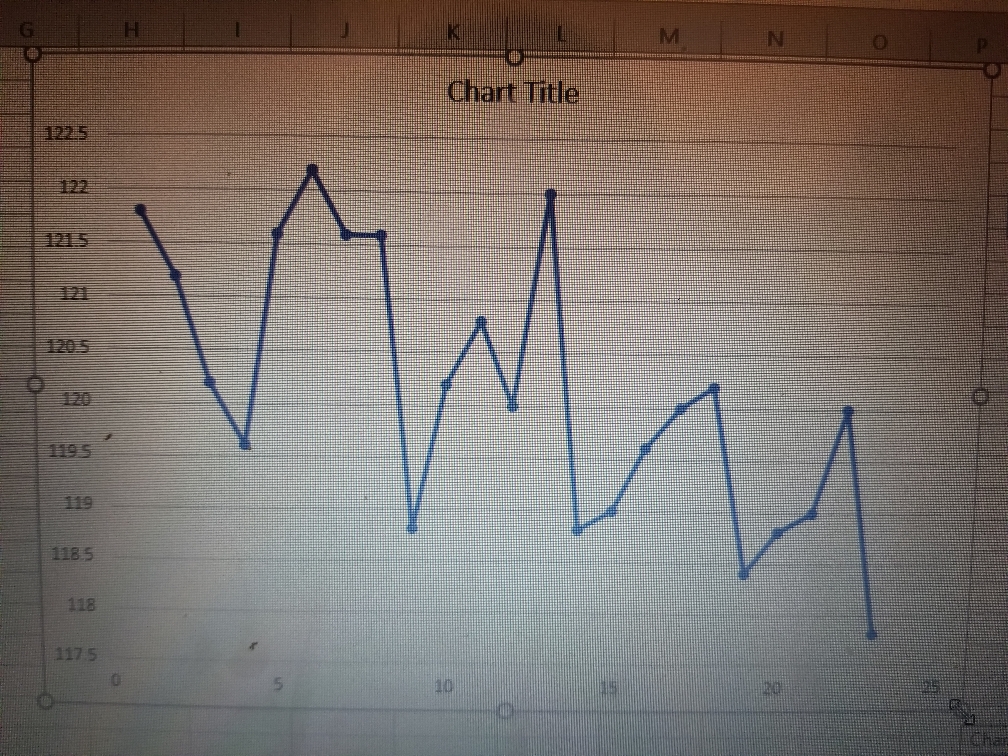 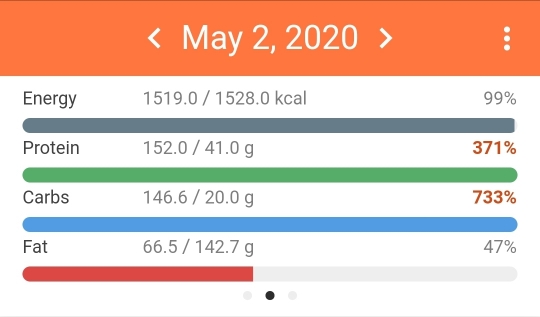 Too many calories, too many carbs. Must increase fats and decrease carbs. 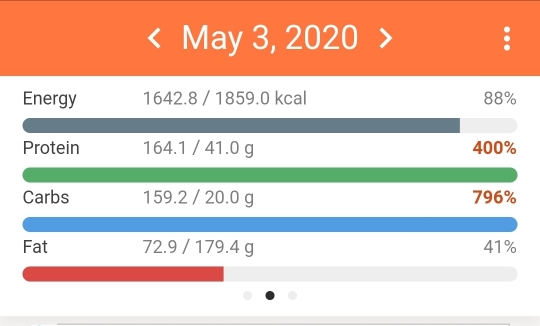 Today marks 30 days since I started restricting and tracking all my macros and TDEE. On April 4, my weight was 123.8, which means that I've lost 6 lbs. in 4 weeks. Not bad.

I want to lose another 6 lbs. in the next 4 weeks so I'll aim for a 750 calorie daily deficit. I'm in a hurry to get to 112. I felt quite... well, okay, acceptable at that weight. I start feeling slightly confident.

I'll take it slow after that because my family freaks out when I get near 110 and 102 is pushing it.

I like playing with numbers and making plans about when I'll reach my goals. It really doesn't matter because as long as I'm at a deficit, I'll still lose. 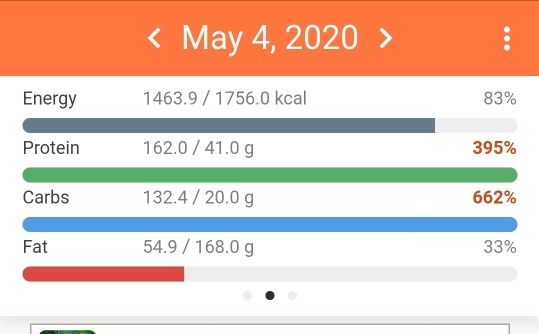 I ate carbs in the form of fries, bread, and candy. Not much, but I shouldn't. I need to stay low carb. 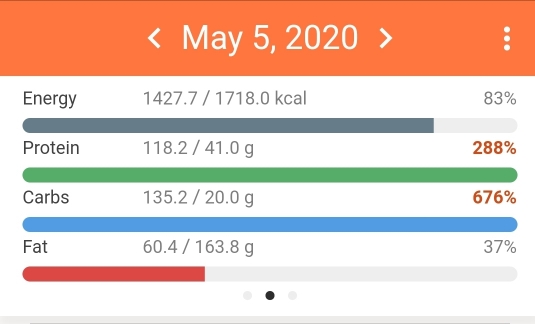 I started work yesterday and today I royally screwed up with food. I'm a waitress and someone else sent in a wrong order. Since that order never touched the table, we were allowed to save it and eat it. I was so hungry that I ate 2 chicken breasts. First, I don't know how much they weighed raw, and second, the info on how many calories in chicken breast are incredibly contradictory. The restaurant's calorie counts seem too low for this. I end up estimating 10 oz of chicken?? Idk.

If I lose less weight than predicted, I'll count this as a maintenance day and eliminate today's estimated deficit from my list. 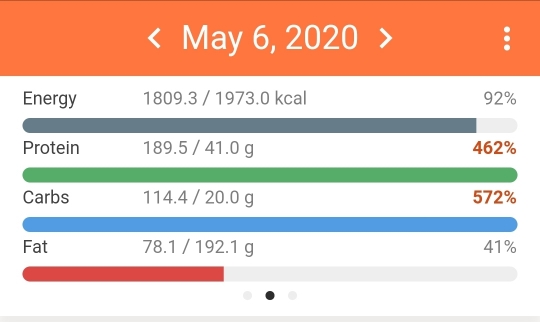 I had 2 tenders and some sweet potato outside my usual food. I got very hungry at work. I can't IF as strictly as I did before because my job's schedule varies a lot and I have to eat before a shift otherwise I'll have to depend too much on caffeine to get me through. As for the tenders, I'm estimating on calories again.

I bought some BCAAs at Vitamin Shoppe on sale a couple of days ago and I use them to make slushies. One is watermelon and the other is peach lime. They're so yummy! I make them for dessert after dinner for negligible calories since they're sweetened with stevia. 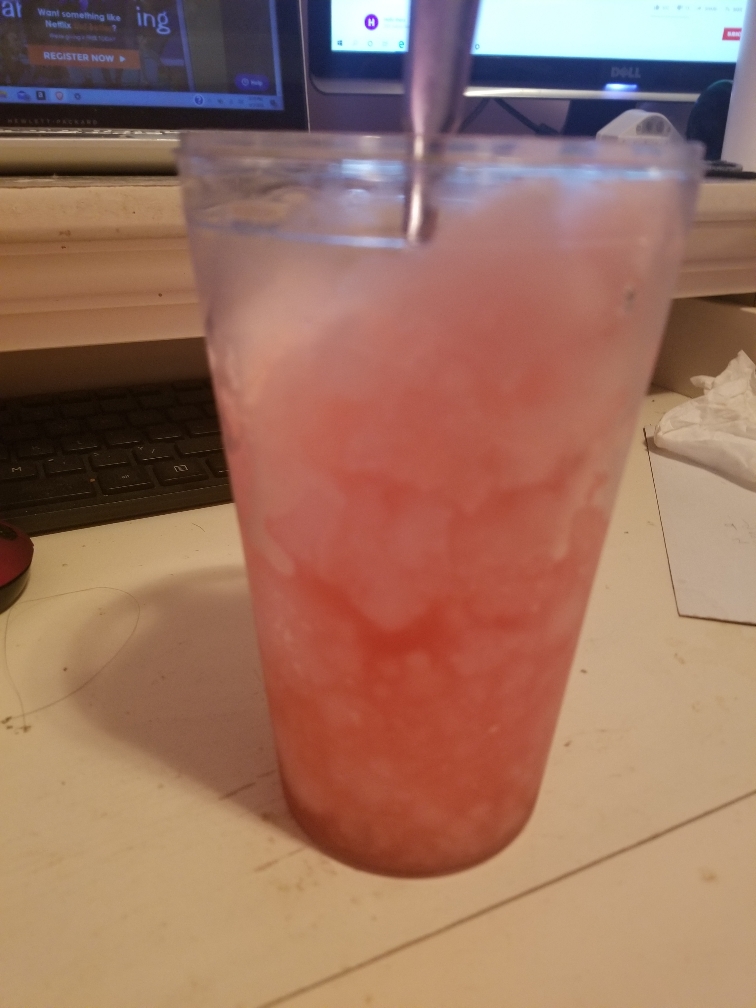 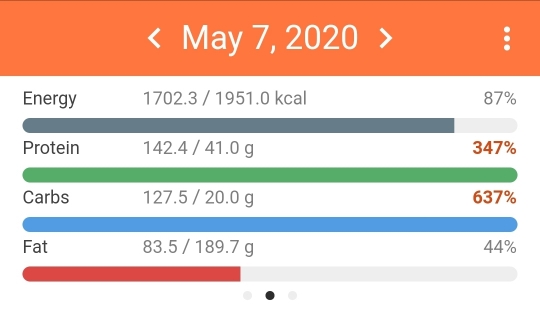 I know I didn't get many steps, but I stood up a lot today and was too tired to pace or let alone to go on a walk. I'm going to stop eating breakfast because I just don't feel hungry before 11am and feel gross. Coffee it is!

lunch: half a chicken breast (200), 2 chicken tenders (I counted them as 3 to be safe... 300), melted cheese, spinach dip with baby carrots, 3 small french fries, broccoli casserole (only ate the broccoli)

At work, I used a lot of napkins to absorb the fat from the chicken and melted cheese and I took several Alli (orlistat) pills to not absorb the fat. I hate not knowing how many calories precisely I ate, but I also can't resist food when I'm really hungry and tired. At least I got some very nice tips today.

Also, my measurements are down! My hips are almost 36.5" and thighs are down to less than 20.75" at their thickest. When I first put on my work pants after quarantine, they were both significantly looser. I could hardly fit into them before

I had to screw up by eating banana bread. Other than that, today was good calorie and macro-wise. I actually didn't feel very hungry.

I took a long walk at the Greenway and it was lovely! The weather was perfect and I listened to music the whole time. 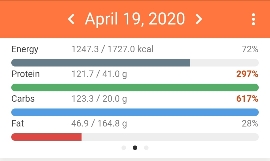 Nothing new except for a text from a guy I met a while ago. I don't like him and I don't know how to respond. He's really nice and intelligent, but not my type. Any advice on how to turn him down without hurting his feelings? 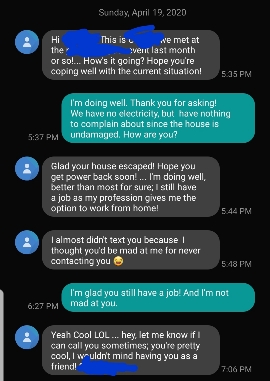 Edit: We've got electricity back!


Guys appreciate it if you're streight with them. Tell him streight out you aren't looking for a relationship and aren't interested in him. It's kinder to him if you don't leave any wiggle room, if you do he'll think there's a chance and keep trying.

That's it no more hummus. (The next day has more, lolz.)

Guys appreciate it if you're streight with them. Tell him streight out you aren't looking for a relationship and aren't interested in him. It's kinder to him if you don't leave any wiggle room, if you do he'll think there's a chance and keep trying.

Thank you! I told him he could text me but I don't do phone calls. He hasn't texted me since. This was almost a month ago, lol.

This morning, I made a run to Walmart to get my mom a card and some flowers. I settled for some dark pink petunias with white on the edges in a pot. Work kicked my ass, or should I say, customers. I could write a book on the nightmares of being a waitress. I only worked from 3:30-10pm and it felt like an eternity despite being so damn busy during certain periods. It was either insanely busy or dead.

at work (I ate all of this scattered between 4-8pm) - 4 chicken tenders (I picked the smallest ones and logged in 5), 6 oz. salmon, 3 fries, melted cheese, broccoli casserole (only the ate the broccoli), deli turkey slice

As per usual, I used napkins to absorb as much fat as I could from the tenders, fries, and melted cheese. I was ecstatic when the cooks made an extra salmon by mistake and no one else noticed. That's so expensive and such a delicacy. They screwed up about 10 orders of chicken tenders, lol. There was so much that even all of the servers didn't get a chance to make a dent on so many orders.

Estimating calories is such a pain. I want to know precisely, but I'm also lacking in willpower. I log in more than I think I ate just to be safe. I'm very hungry atm. It doesn't feel like I ate 2000 calories, but I'm always hungry sooo... 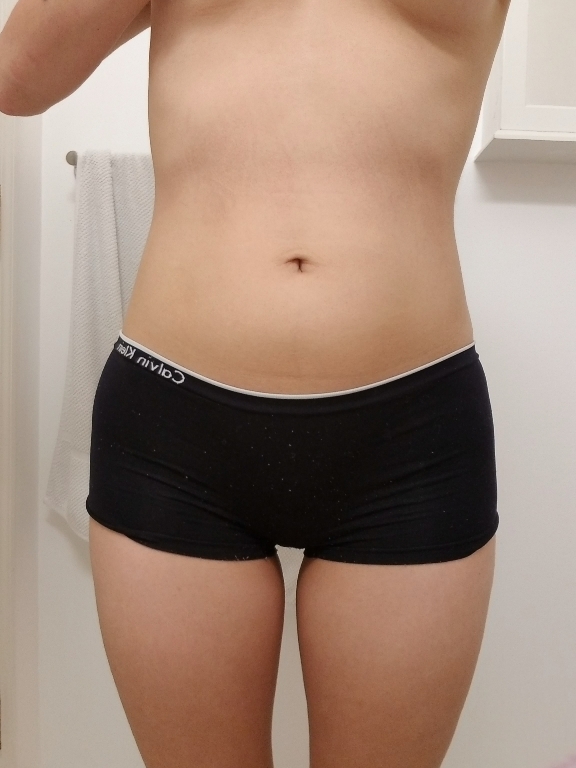 I think I'll be weighing lower than 117.4 tomorrow.

My dad told me to stop losing weight and that I looked "thin enough." I told him that I'd lose as much weight as I want, this was none of his business, and I prefer to be skinny. I also told him that just because he doesn't find it attractive doesn't mean it's unhealthy.

At least someone at work told me I was "looking snatched." Haha, I'd never heard that expression. I asked him what that meant and he just laughed and said, "well, it just means... snatched."

I asked him, "Is that a good thing or a bad thing?"

I took screenshots of my timeline for deficits and goal weights. 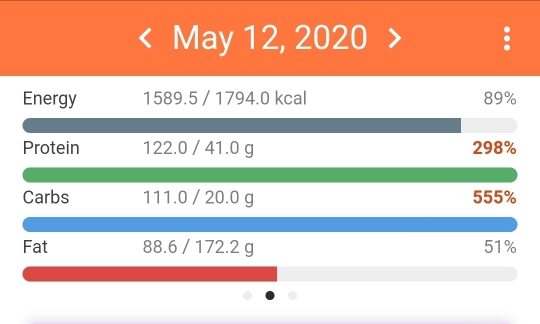 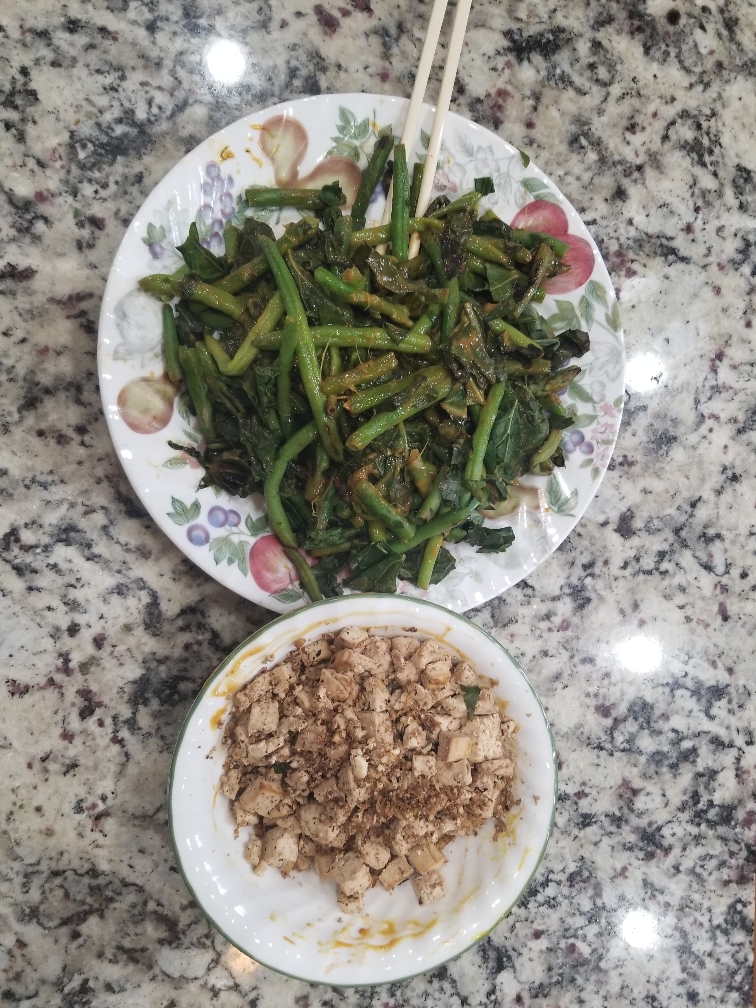 Back to Low Carb Diets

Also tagged with one or more of these keywords: plant-based, exercise, steps, high protein, low carb