Anyone else still often just feels like the sad teenager they were? - Page 2 - Age 20+ - Forums and Community

Anyone else still often just feels like the sad teenager they were?


52 replies to this topic

Thank you to everyone who replied, I've read every single one and it has made me feel not so alone <3 Though I am sorry to hear many are able to relate

Let's hope for better days for all of us soon. There will be

Yeah, my motivation towards doing anything is completely stunted. I haven't experienced or done half the things the average 16 year old has done, let alone a 21 year old. I'm a complete shut-in; I do hardly anything different each day; and so time flies by super fast. I wish I wasn't this way but I don't see any point in doing anything else. I don't have many options in the first place. I'm poor and live in the middle of nowhere. I actually really like change and exciting scenarios, but where do I find such things? I certainly don't "pass" as an adult, either. People laugh at me often when I try and assume any responsibility at work and stuff. As if they can see right through me, that I have the mentality of a child...

At least I am DEFINITELY a nicer, calmer person now than I was as a teen :')

So like, I matured...emotionally- super early but socially- really late due to home education, and went straight from uni halls to living with my bf within a year. We've been together nearly 8 years but bc it's his house he pays all the bills and stuff.

Since UK lockdowns I've been unemployed for a year (retail) while he's been working and earning all the money. I feel so bad, it's like I never matured from being a 17 y/o myspace emo. Sadly including the S/H urges and wild moodswings.

I started disordered behaviours at like 23, even knowing it's not really...expected or recognised for 'older people', now I'm nearly 30 and have just given up caring. Honestly it's really freeing, I can wear hotpants or binge drink all day if I want, or I can do free openuni courses to better myself... Like, I'm old enough to know what works for me and what's actually dangerous. Having a passive deathwish means I don't necessarily always do what's best, but who does?

I'm rambling. Basically my sense of humour and personality quirks mean I probably won't ever mature, sucks for my older friends and younger siblings but my bf thinks I'm adorable so...ask me again in 30 years.

TLDR: I'm 29 and will probably never grow up but people like me better this way so... *shrugs* it's not always a bad thing

have you had enough, or have you become

the character that you portray?

mercury is always in retrograde.

I always say I’m “better now” because I’m not suicidal anymore. But I’m still a wreck. 24 and I feel like a kid still, I do blame it on abuse and low self steem. It gets easier with time but I’ll never get well... 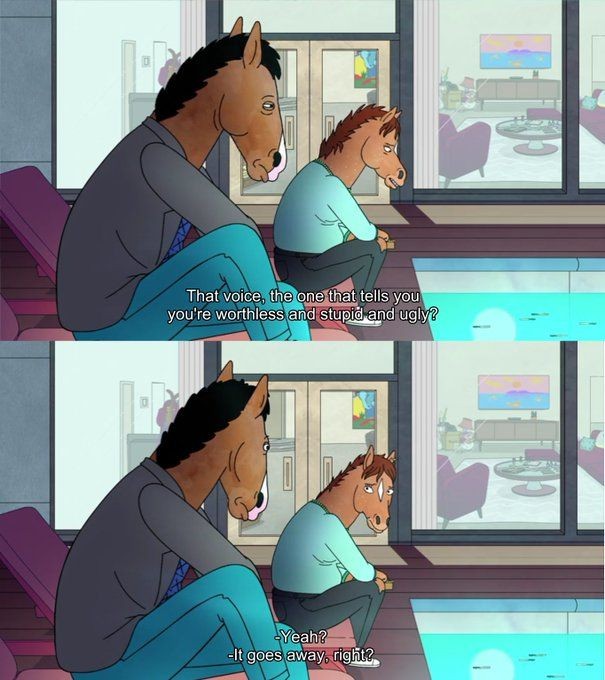 Yeah, I feel like this a lot. I’ll be 26 in a few months. I feel like my exterior has changed and obv my career is doing well but inside I just feel the same.

Definitely not alone in this feeling! I know a lot of people that suffer from ED or mental illness in general can sometimes get their mindset 'stuck' in younger years, myself included. I still haven't fully accepted the fact that I'm no longer 17 but then again it is hard to accept that reality when in your mind it still kind of is your reality. I still feel 17 and honestly I don't know if that will ever change.

ahh fuck this describes me so well... stuck in a limbo since graduating HS...

I can't drive, I have no friends, and I'm a loser just like I was when I was a teenager. The only difference is it's not cute anymore.

i'll be honest, i just turned 23 and i don't feel any more emotionally mature than i was when i was 17

i still almost exclusively dream about my childhood, where i am exploring the elementary and middle school

and just running around and playing with people i just met, like i used to at the park

i have a physically adult body in my dreams and so are the people who i meet but, it all feels like we are no older than 11

I can completely relate to this.
I often find myself reading back my old poetry/food journals and feel that my emotions then are no different than they are now. I'm more experienced, but no less fucked up now compared to my teen years (only difference is I drink more and got into weed and cigarettes). I think having this eating disorder and mental illnesses is harder to cope with now because of all the pressures of adult life instilled on me. Sometimes I want to go back to being that little anorexic goth kid that was scared of everything, yet had no pressures of getting a job, paying bills, and going to college. It was just me, ana, and my mountains of metal CDs and band shirts.

I relate so much to this and to all of your experiences. I'm 23 and I honestly feel like I'm still 15. I don't know when/if that will ever change. I totally relate to not feeling like a real adult due to having mental illness and that it can appear that other people our age. are so "normal" while we're all dying inside. It sucks.

Idk, just rambling but I'm getting older (25) but I just don't feel it. Deeply inside I still feel like I was 16 yesterday and am often just as sad and "broken" as I was then. I feel like not much changed and I just try to pass as an adult the best I can on a daily basis.

Anyone else feel like that? Even though those years weren't the best for me, I still get nostalgic for them sometimes.. It also makes me feel like I'm too old to have an ED* or to still enjoy listening to MCR and such

*By this, I mean that I thought I would have "gotten over it" by now or moved on. Not trying to invalidating people with EDs because of their age!

I still feel like the same lost 16 year old, like I stopped aging mentally when this disorder started. Whenever I look at anything I enjoyed during that era of my life, it feels like I'm finally home again. It's kind of a weird denial that one day, I'm gonna be able to fix myself and go back. I'm still coming to terms with that I ended up missing out on so much because of my ED an other mental illnesses, and I thought I'd always have time to make up for it. But like now it's been 9 years and that time has long passed and those experiences are gone and it's hard for me to accept that I'm never going to get that time back.

Sorry this is like depressing lol. Life is definitely waaay objectively better now for me than it was back then, but it's way "different" so like my inner 16 year old is never quite satisfied. I'm just gonna be listening to MCR and Blink 182 and everyone else I listened to in my youth forever

I still feel like the same lost 16 year old, like I stopped aging mentally when this disorder started. Whenever I look at anything I enjoyed during that era of my life, it feels like I'm finally home again. It's kind of a weird denial that one day, I'm gonna be able to fix myself and go back. I'm still coming to terms with that I ended up missing out on so much because of my ED an other mental illnesses, and I thought I'd always have time to make up for it. But like now it's been 9 years and that time has long passed and those experiences are gone and it's hard for me to accept that I'm never going to get that time back.

Sorry this is like depressing lol. Life is definitely waaay objectively better now for me than it was back then, but it's way "different" so like my inner 16 year old is never quite satisfied. I'm just gonna be listening to MCR and Blink 182 and everyone else I listened to in my youth forever

LITERALLY I could have written this post, it's a little eerie lol

I totally understand how you feel. I think the feeling that we stop ageing when some sort of disorder is actually really common - more so because I'm shocked by how many people actually relate to this post. I also get the feeling of 'One day I'll be able to go back and fix things'. I keep thinking back about things that happened in high school and should REEEALLY not be relevant anymore, but I still feel like it matters?? idk it's very annoying, so I'll join you in listening to MCR and Blink because those are simply good things that bring me joy, and not many things in life feel simple anymore lmao

It wasn't depressing, thanks for your reply <3 I really, totally get it

This is painfully relatable. I’m 26 now and always forget I’m not 17. I don’t feel like an adult, but I’m also depressed because I wasted my youth... being... depressed. I married the guy I’ve been with since I was a teenager, he managed to pull himself out of his depressed rut and has grown so much over the course of our relationship and “matured” into a functional adult but I haven’t been able to do the same. I love my husband more than anything in the world, but also I feel pathetic for being so dependent on him in every way. I have no real ambitions or direction in life other than losing weight, and find myself getting weirdly jealous of my 16 y/o younger brother because he’s young and full of life. Thinking about the fact that it’s all downhill from here for me triggers major suicidal ideation, but I know it’s true. It’s kind of a miserable existence.

yeah, I’m 24 and.....like some things have gotten better? i’m less emotionally volatile and my depression is so so much better, like i don’t wanna die anymore lmao but my anxiety is way way worse. it’s like i’ve been dealing with the same disordered eating stuff since i was like 14 n it’s just like.....a secret shame? like all the other mh stuff i’ve dealt with i can be fairly open about, but literally not a soul knows about my ed type stuff n aaa

Definitely, I started reminiscing more and more about this ever since my second quarantine started. (Stuck at home since November last year)

And it's crazy how much time has passed? Sometimes I still feel like the 11 years old that started their first diet or the 16 years old who got admitted to a psych ward because they had an OD... I'm turning 22 this year. I missed out on my teens because of my mental health issues, and it makes me so sad sometimes that I just sit in my room and cry.

Eating disorders are like a gun that’s formed by genetics, loaded by a culture and family ideals, and triggered by unbearable distress.