25 replies to this topic

I've always wanted to do a bootcamp type diet, but never quite found one that fits me so! Introducing the ABC diet, but entirely catered to my wants! 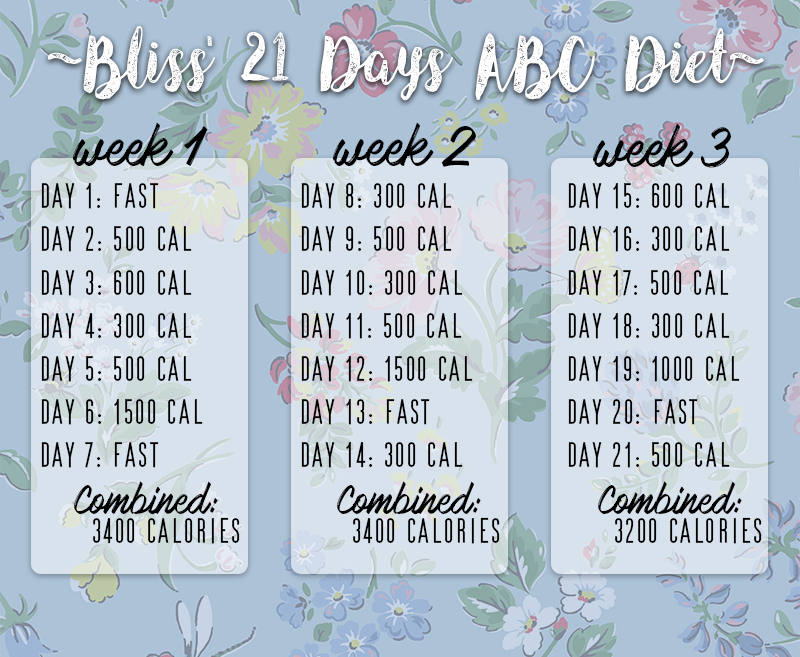 Look I even made a fancy graphic...
The reason why I changed it is because whereas I would like to restrict on the lower end and I don't mind fasting, I need a higher day every once in awhile and would like to hover around 3000-3500 weekly. It is also there as an insurance to eat the bare minimum, if I start restricting by a lot I know myself well enough to know I can get a bit overboard.
Now, the reason I'm cutting so low to begin with is because I need to lose a lot of weight + I'm going away in 21 days (and then I won't have access to a scale...) so I kinda wanna see how low I can get by restricting until I have to go away. And I need something to obsess over until then.
I don't really recommend anyone to tag along and do it with me, it's fairly high restriction and there is other, better ways, but at the same time, if you wanna, feel free to post your stuff in here. Just make sure to also take care of yourself, drink lots of water and try to eat good nutritious food for the calories that's available ♡ But I am the biggest idiot and following my example is probably not the best idea.
Personal Ground Rules:
★ Drink lots of water - at least 2L on eating days and 3L when fasting
☆ Walk 5000 steps a day
★ Be a bit flexible, as long as it's within the 100s of daily goal it's fine
☆ Do 16:8 intermittent Fasting
★ Weigh myself daily when waking up
☆ No purging or restricting lower than daily allowance
Starting Stats:
date: 18th October 2021
weight: 244 (I know...)
height: 5'4"
age: 27
bmr: 1834
tdee: 2515
measurements: gonna post tomorrow, real tired rn
Ending Stats:
none yet!

Honestly - considering that it's been awhile since I last did a 36 hours fast, I found today pretty easy. Only started getting rough around now (24th hour mark), but I'm about to go to sleep and when I wake up it won't be too long until my eating window.

Feels good getting started restricting again, I was doing well in October(after avoiding doing something about my weight for many years). But then Halloween happened and I've just maintained since.

OK so I know losing an entire pound by fasting a day is prob just water weight and I'll be up again a little tomorrow, but!!! it stopping at 243 feels so good.

Massive storm here though, so slept like shit and didn't manage to do my steps since I can't go outside. At least I managed to do the Calories, even though it was rough today too.

Another day of losing way more weight than I thought I could, probably still water weight, but it still makes me happy. Still can't really walk outside cos storm, so rip my steps. Feeling pretty drained too, but should be expected given how little I've been eating.

Today was easier than yesterday, I've has way more energy. Almost like smoothies meant to lose weight on gives you more nourishment than a tiny portion of chicken nuggets.

Really wanna binge, hopefully this tea will fix that

Hi! Do you have kik, Instagram or something and want to stay in touch?

Hi! Do you have kik, Instagram or something and want to stay in touch?

I do!
I'm Bliss.png on kik, would love to stay in touch

Having a 500 day after a 300 feels so weird, cos I ended up just having dinner and it felt like a huge portion. Struggled with water + getting enough steps

Man I tried so hard to actually meet the goal, but hitting 1500 was way too fucking hard. Lol I'm worried I'll wake up tomorrow, weigh myself in and have gained everything back. I added in maintenance days to make me happy, but maybe that was a mistake cos now I can't sleep cos I'm stressing about gaining from it.

ALSO LMAO just realised but I've written the wrong month on like... two of my posts in here???

good luck on this !!

currently working on getting out of a binge cycle before 2022

good luck on this !!

I'm happy I maintained, I was expecting to at least have gained a bunch of water weight since I've been restricting so hard. But in fact I even lost a bit. Maybe even the "normal" amount to lose in a day if you diet like a normal person instead of a crazy person.

Fasting yesterday was roughhhhh, had to help my mum out and she offered me dinner, but I got away with saying I'd eaten earlier. Work was also more hectic than usual and I visited a couple of friends, who again, offered sweets. But I made it. Somehow. Keep on fantasising about eating really unhealthy food now though. Miss having cakes.

Figured I post some thoughts since I finished week one so:

I lost way more than I though I would so far, hell, I lost more than I thought was possible. 9lb in a week what!? I mean, I assume some, maybe even most, of it was water weight, but even so, it can't all be. I keep on expecting it to drastically slow down, and maybe it will. But yeah, in general really impressed with that one.

My intake was rough, I'll stick to the way it is for now, but I think that if I try to do a boot camp type diet again, I'll make it more flexible. Some days I'm hungrier than others and it would've been nice to swap the days around. My 1500 day feels way too high when I'm doing low restriction like this, I struggled wanting to eat things and even with the chocolate I ate I didn't hit my daily goal.

Also amusingly, feels easier to eat 300 than 500, can't figure out a good thing to have for "just" 500 calories. Since I allowed myself to go 100 below or above my goal, I never went drastically over, and my weekly intake was lower than what I set. There was nights where I wanted to eat more, and I almost ate more, 'cause I felt my body needing more than I was giving it, but instead of actually being able to eat, I just prepared the food and ended up crying instead of taking a single bite. And that was well... Pretty rough. The easiest days of all were the fasting ones, I don't really mind the feeling of hunger it's comforting and it's much easier to just eat nothing at all.

In hindsight, adding 5k steps as a thing I needed to do every day was a huge mistake and setting myself up for failure. It's winter here now, and I hate going outside in winter. Most of the days there was either really strong winds, lost of rain, a combination of the two, or my personal favourite, snow. I hate the cold. My flat is too tiny to really work out inside (tho thankfully that is changing soon). Hopefully next week will have better weather so I can actually bring myself to go outside, cos I do really enjoy walking.

So all in all I think it went pretty well for a first week. Somethings were really rough, but the results were worth it. I feel better mentally than I did before starting it, aside the whole 'crying in front of food cos I need to eat but is too scared to do so'. Which sounds silly to say, cos that is obviously a mental low, but in general I feel better. It's nice to have a plan I both see the result of and feel is working. No comments on the intermittent fasting/water intake, since that's just like normal anyway.

tbh need to get the chocolate version of the smoothie I drink, the strawberry one is nicer than expected and I miss chocolate flavours

Honestly not surprised I remained at the exact same weight as yesterday, cos woke up this morning feeling super bloated and constipated. Turned out I'd gotten my period. So now I'm just in a lot of pain, so haha, barely any steps done since I can't physically walk without hurting.

Also, as a side note, I have to eat dinner with my family on sunday, and since there's no way of getting out of it, gonna swap my 1500 calorie day to that then. And prob go over 1500 since I can't measure all my food and will have to guess. rip me I guess.

Yesterday was such a disaster I didn't even wanna log it lol. Ended up eating cos a friend ordered me food, then I panicked and tried to purge it. Even though I've never been a purger and it was a tiny meal. Prob only got like 30% back up anyway, so didn't even go great there.

Dinner went shockingly well, except I overate, but I expected to today. Still purged, today a bit more successfully. But I'm still a bad purger so I'll count all the cals.

At least I managed to eat in front of people without panicking this time. That's a first since my relapse. Prob gonna fast tomorrow, I like fasting after my big eating days and I need a break from food

love fasting days tbh. Being hungry and fantasising about food > actually having food.

Since I swapped my days around to change when my 1500 cal day was (and thus also the fast) I made today the 500 cal day that was meant to be the 11th day.

Back to ABC Diet